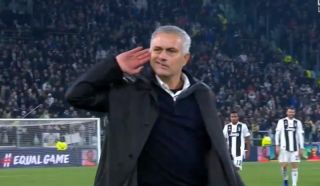 After being sacked by Man Utd last month, Jose Mourinho is seemingly on the look-out to make a rather swift return to management.

As noted in the club’s statement, the Red Devils opted to part company with the Portuguese tactician after an underwhelming first half of the campaign.

SEE MORE: Two key demands Jose Mourinho is said to be making ahead of possible return to former club

The Premier League giants have since gone on to rattle off five consecutive wins in all competitions as they’ve seemingly taken off the shackles under interim boss Ole Gunnar Solskjaer, which suggests that the decision to replace Mourinho was the right one.

Nevertheless, given his track record, experience and winning pedigree at the highest level over the years, it shouldn’t take too much away from his reputation as he remains one of the most successful coaches of all time.

As he considers his options ahead of his next role, Mourinho has seemingly dropped a major hint that he would be honoured to return to one of his former clubs. With Chelsea not an option as they only appointed Maurizio Sarri last summer, the ‘Special One’ has been linked with a return to either Real Madrid or Inter, as noted by the Sun.

He has now publicly commented on those links, and it sounds as though he would certainly be open for a second stint at either the Bernabeu or the San Siro, if he received a call. However, he categorically ruled out a possible return to Portugal to take over at Benfica.

“If any professional — a manager or a player — is wanted by a former club, it means we did something positive,” he told Correo da Manha. “I felt this when I went back to Chelsea [in 2013.]

“When any professional returns to a club it is a tremendous honour. They’re not signing someone they don’t know, they are going for someone they know, someone who has already been there.

“I have no intention of working in Portugal at all. The best way to respect a great club [Benfica] and a great president is to say that I was not approached. Today, I am not an option for Benfica”.

Madrid currently have Santiago Solari in charge until the end of the season, and so they would arguably seem like the most likely choice. Nevertheless, with Luciano Spalletti struggling to turn Inter into genuine Serie A title contenders this season, that could raise question marks over his future.

Time will tell where Mourinho ends up next, but based on his comments above, it seems as though he would be more than happy to answer the call if one of his old clubs asked him to come back for another go.