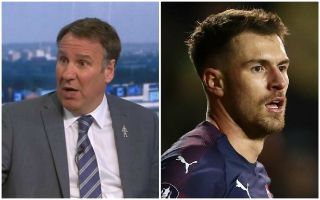 Arsenal have come under heavy criticism from former star and Sky Sports pundit Paul Merson over losing Aaron Ramsey and the way in which they have dealt with expiring contracts in recent times.

The 28-year-old will see his current contract with the Gunners expire at the end of the season, with BBC Sport noting that he has been heavily linked with a switch to join Juventus.

On one hand, it could be argued that if certain players don’t fit in the plans of the club moving forward, then there is a legitimate reason to allow them to leave.

However, from a business perspective, to lose a player like Ramsey who is proven at the highest level for nothing when the Gunners are arguably better off selling him in January to at least receive a fee and reinvest that into a replacement seems like poor planning and decision-making.

That is essentially what Merson’s point is below, and clearly he isn’t impressed with his former club’s handling of the situation while he also managed to include a dig at former boss Arsene Wenger too despite the fact that the Frenchman left the Gunners at the end of last season.

“It’s stupidity from Arsenal to allow someone of Ramsey’s quality to let their contract run down,” he told Sky Sports. “In footballing terms, it’s criminal.

“Arsene Wenger sorted out his contract every year but seemed to forget everyone else’s!

“Arsenal can replace him but it’s going to cost £40m-£50m. That’s where the stupidity comes into it. Sanchez went for nothing and when Mesut Ozil’s contract ran down they have had to pay him an absolute fortune to keep him. It’s ridiculous.”

Arsenal could undoubtedly have done a better job in cashing in on certain exits. Instead, it looks as though they’ll watch Ramsey exit on a free transfer this summer and Unai Emery will hope that the hierarchy can deliver a capable replacement.

Why that remains Wenger’s fault given Arsenal have had since the summer to sort out Ramsey’s future without him at the helm is debatable.