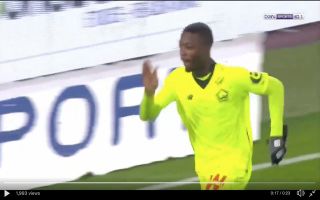 Arsenal transfer target Nicolas Pepe managed to score a goal and produce a fabulous assist to one of his teammates in the space of just 12 minutes for Lille this evening.

According to ESPN, the Gunners are interested in signing the Ivorian after his emergence as one of Europe’s brightest stars this season, the report highlights that the French club now value the forward at £72m.

Pepe opened the scoring in the 8th minute of the clash, the attacker was played in by his teammate after making a a well-timed run, the in-form star sealed off the move with a lovely finish.

Just 12 minutes after opening the scoring, Pepe was at the heart of things once again for his team. In the 20th minute of the tie, Pepe showed off his trickery with a wonderful roulette. Pepe then played in Rafael Leao with a perfectly weighted pass, the Brazilian stepped away from the keeper and scored.

Check out Pepe’s goal below:

Check out Pepe’s wonderful assist below:

Really nice assist from Nicolas Pepe tonight for Rafael Leao, also scored a goal on his own.
Mans a real baller + a scoring machine.

The Ivorian has already managed to equal his goal tally of last season, with half of the season yet to be played the Lille star could stake a claim for the Ligue 1 Golden Boot this season.

There’s no doubt Arsenal could do with someone with his pace and ability in that wide-forward position, with Pepe looking an obvious upgrade on inconsistent performers like Alex Iwobi and Henrikh Mkhitaryan who’ve filled that role this season.