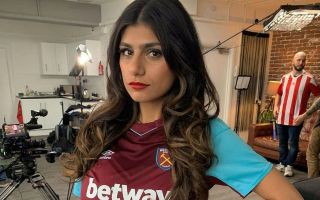 Arsenal midfielder Matteo Guendouzi has been slammed for ‘going down’ too easily during today’s defeat to West Ham.

The French youngster has generally made a strong start to his career in the Premier League, but today was not his best day at the office.

MORE: What Unai Emery said about leaving Mesut Ozil out for Arsenal clash with West Ham

In one of the most brutal put-downs we think we’ve seen on Twitter, this is what Mia had to say to Guendouzi about his play-acting, or ‘going down’.

FUCKING PUSSY @MatteoGuendouzi, IVE SEEN YOU GO DOWN MORE IN THIS MATCH THAN I DID IN 2014 #COYI ?

If that doesn’t make Guendouzi cut out the diving, nothing will. Let’s hope his team-mates show him this tweet in the dressing room after the game.

And even though Mia is a West Ham fan, we’re sure she’d be very welcome at Arsenal or indeed most clubs if they’re in need of better motivational team talks!