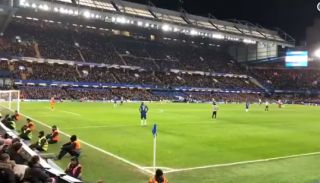 Chelsea fans sent a clear message to youngster Callum Hudson-Odoi today as the player linked with a transfer to Bayern Munich entered the Stamford Bridge pitch.

The 18-year-old has been the subject of much speculation of late, with this recent tweet below from ESPN claiming he was the subject of an offer from Bayern and would not be signing a new contract with Chelsea.

Still, these Blues fans chanted ‘we want you to stay’ when he came on today, showing just how highly rated and liked he is at the west London club.

It’s been a while since Chelsea saw a homegrown talent come through and shine for their first-team, so many will hope Hudson-Odoi can do that instead of take up the chance of a big move to Bayern.

Chelsea fans chant – "Hudson-Odoi, we want you to stay."