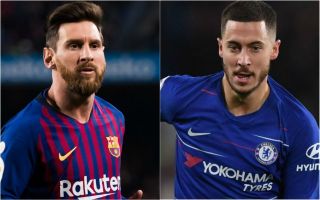 Chelsea star Eden Hazard has made it double figures for goals and assists for the season today by setting up the Willian goal vs Newcastle.

The Belgium international now has ten goals and ten assists to his name this term, joining Barcelona superstar Lionel Messi as the only other player in Europe’s big five leagues to manage that record.

The Argentine has sixteen goals and ten assists to his name in La Liga, so is doing a little better on the scoring front than Hazard is at the moment, according to numbers in the tweet below from Opta:

Still, both are undoubtedly among the finest footballers on the planet at their best, and Hazard really does look a much-improved player this season since Maurizio Sarri replaced Antonio Conte as Blues manager.

Chelsea lead 2-1 against Newcastle at the time of writing, with Hazard’s quality giving them a small edge as his pass picked out Willian, who did the rest with a fine finish.