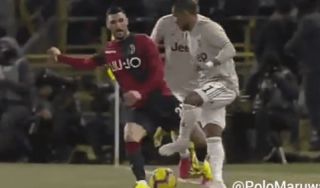 Juventus winger Douglas Costa has a reputation for being a bit of a show-boater, and it really does make him a joy to watch.

Here’s his latest offering, which has been doing the rounds on social media this evening:

As clean as they come. #juve pic.twitter.com/9xeLVNQw4a

Costa was recently linked as a transfer target for Manchester United by the Sun, and he’d be great to watch in the Premier League.

It remains to be seen if the Red Devils can realistically do something in the next couple of weeks, with Juve surely likely to fight hard to keep this hugely talented wide-man.

If United could get him, however, Costa would surely be a significant upgrade on flop signing Alexis Sanchez, who hasn’t done enough since joining the club from Arsenal this time last year.

Brazilian giant hopes Juventus will allow ace to depart as they try and complete transfer May 18 2021, 8:08
Bayern Munich

Brazilian giant has eyes on Juventus ace who hopes to terminate his contract with Bayern Munich stay unlikely May 12 2021, 21:29
Bayern Munich