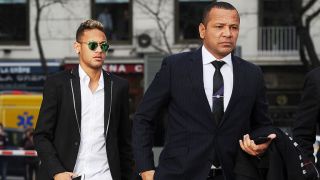 Speculation continues to link Neymar with a return to Barcelona, but based on his father’s reaction to the reports, it’s fair to say that they’re not accurate.

The Evening Standard noted this week how fresh rumours have recently paired the Brazilian superstar with a second stint at the Nou Camp, less than two years after his move to Paris Saint-Germain.

SEE MORE: Barcelona eye loan move for surprise attacker in January, €10m cost could be a problem for the Catalan giants

His spell in the French capital has been a successful one thus far, as he’s scored 46 goals in 51 games and won four pieces of silverware in just his first season with the club.

In turn, there doesn’t seem to be a major need for him to switch clubs again, especially for Barcelona given his decision to leave the Catalan giants not so long ago.

With that in mind, it appears as though the ongoing speculation of a return to the reigning La Liga champions has left Neymar’s father amused, as seen in his Instagram posts below.

Firstly, he branded a report as ‘Fake News’, before a second post was put up of a child laughing uncontrollably as the left side of the screen scrolls through the body of another report.

Clearly, the 26-year-old’s father isn’t in negotiations with Barcelona, or at least that’s the message he wants to put across publicly with such posts.

Time will tell if anything happens in the summer as it’s highly unlikely that PSG would even entertain the idea of losing their talisman halfway through the season, but based on the posts below, it would suggest that Neymar and his camp have no intention of leaving France for a return to Barcelona in the immediate future.

Neymar clarifies his future at PSG amid links with Barcelona return