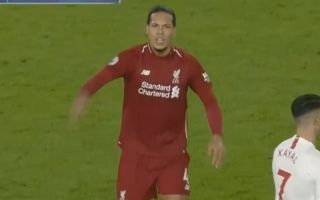 Liverpool defender Virgil van Dijk showed why he’s become such an important leader at the back for the Reds in this short video clip below.

The Dutchman absolutely screams at Trent Alexander-Arnold over his positioning, trying again and again to make sure he gets his team-mate’s attention.

Van Dijk joined Liverpool from Southampton last January and has been immense ever since then, and he helped the team to another win and clean sheet against Brighton today.

It might seem small, but it’s moments like this that make Van Dijk one of the best at what he does – and a huge character that title-winning dressing rooms need.