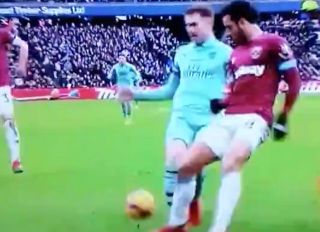 Arsenal fell to a 1-0 defeat to West Ham on Saturday, with Aaron Ramsey’s introduction in the second half not enough to help the Gunners turn things around.

It was a disappointing afternoon for the visitors, as they missed out on the opportunity to put the pressure on Chelsea in fourth place.

Instead, it was Declan Rice who emerged as the hero for the Hammers, with his effort early in the second half separating the two sides.

With West Ham holding on to their lead in the latter stages, they did well to keep possession and frustrate Arsenal. As seen in the video below, Ramsey was looking to close down their players at every opportunity but Felipe Anderson’s quick thinking saw him almost nutmeg the midfielder and leave him trailing.

Fair play to Ramsey, as he knew he was done by some nice skill and quick-thinking from the Brazilian, as he can be seen having a chuckle before seemingly tapping his rival in appreciation before turning and running back after the ball.

The three points were key for West Ham on Saturday, but Anderson had time to add some entertainment value too…