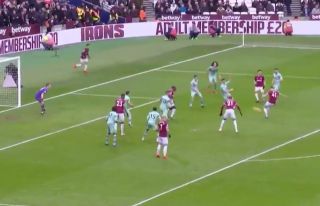 After being on top for most of the first half, West Ham wasted little time breaking the deadlock after the break with Declan Rice scoring the opener.

The home side looked a bigger threat in the opening 45 minutes, although Alexandre Lacazette and Matteo Guendouzi did go close for the visitors.

However, after the ball broke to him in the box, Rice kept his head and produced a composed finish to stroke his effort past Bernd Leno into the back of the net, as seen in the video below, just minutes into the second period.

It’s what Manuel Pellegrini’s side arguably deserved, and now it will be down to Unai Emery to get a reaction out of his men to ensure Arsenal don’t miss the chance to pile the pressure on their rivals for a top four finish.

As for Rice, it’s his first goal for the Hammers, and he’ll certainly remember it, especially if it ends up helping to seal a win over Arsenal.

What a finish from the midfielder to put @WestHamUtd the lead against @Arsenal! ?