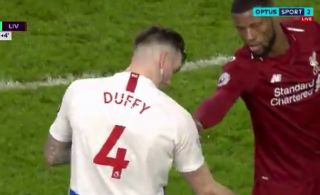 A fair few Liverpool fans seemed to really enjoy this moment from Reds midfielder Georginio Wijnaldum towards the end of the 1-0 win over Brighton.

Mohamed Salah’s goal settled a tense affair and sent LFC seven points clear at the top of the Premier League, but this was, on the whole, far from a classic.

Wijnaldum, however, produced a comedy moment as he confronted Brighton’s Shane Duffy over his complaint about a handball decision.

The Dutchman simply reminded Duffy where his arm is, backing up the referee’s decision.

Simple, but fine work from Gini!

Loved the bit at the end where Wijnaldum told the complaining Duffy where exactly the ball hit his arm by pointing to it ? #lfc

Huge huge fan of Wijnaldum tapping Duffy on the arm when he was throwing a tantrum at that handball at the end.

I'm here for Wijnaldum telling Duffy where he committed the handball ?

Lmao at Gini trolling Duffy over that handball ? #BHALIV

Gini, in all seriousness, showing Duffy where exactly the ball hit him on the arm at 93:25… That was my moment of the game ? #LFC #BHALIV