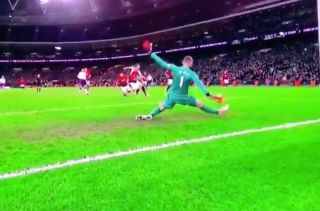 Man Utd goalkeeper David De Gea was in stunning form on Sunday as he helped secure a 1-0 win over Tottenham at Wembley.

Marcus Rashford broke the deadlock just before half-time for the visitors, who continued to pose a real threat themselves after the interval with the likes of Paul Pogba going close to adding a second.

However, they owe a major debt of gratitude to De Gea, as the Spanish shot-stopper put in a sensational performance to deny Spurs an equaliser and a way back into the game.

After producing key save after key save, he arguably saved the best till last, as seen in the video below, as he denied Harry Kane from close range with his feet.

It’s difficult to pick his best save out, but given the impact he made to help United keep a clean sheet and secure all three points, few would argue that he deserves the Man of the Match award after such an influential display.