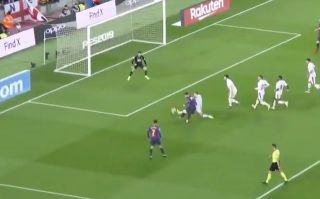 Lionel Messi got himself on the scoresheet for Barcelona in their clash with Eibar on Sunday, and he brought up a personal landmark in the process.

The 31-year-old added a second with Luis Suarez scoring either side of his effort, as after initially starting the move, he got himself into the box, showed wonderful composure and patience before producing a clinical finish, as seen in the video below.

While it edged the Catalan giants closer to three points this weekend, it was also a memorable moment for the Argentine icon too as it was his 400th goal in La Liga.

That is an incredible achievement and just shows how consistently brilliant he has been over the years to reach such a landmark and he still has many more years potentially left ahead of him to add to that tally.

Importantly for Barcelona though, a win over Eibar would move them back five points clear at the top of the table, as Messi and Suarez continue to fire them towards more silverware this season.

Messi has scored his 400th goal in LaLiga!!