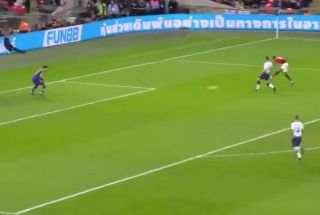 Marcus Rashford produced an excellent finish to give Man Utd the lead at a key moment in their clash with Tottenham on Sunday.

Both sides looked a real threat going forward in the opening 45 minutes, as although there was a lack of clear-cut opportunities, they attacked with pace and intent.

Just as it seemed as though they would be going into the half-time interval level, Paul Pogba produced a moment of real quality as his assist put Rashford in behind the Tottenham defence.

The United forward did the rest as he raced into the box before producing a brilliant drilled finish to beat Hugo Lloris and break the deadlock.

Given this is Ole Gunnar Solskjaer’s biggest test since being appointed interim boss, he will be delighted to see his side defend so well and take the lead at a crucial time in the game just before half-time.

What a start ! #Rashford pic.twitter.com/qZGcxRCuly

Rashford hits the bullseye! ?#MUFC cut #THFC open on the counter-attack and Solskjaer's tactics have worked a treat!

That pass from Paul Pogba… ?