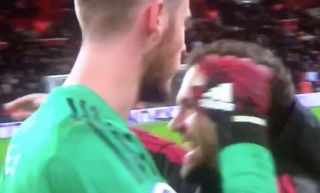 David De Gea put in a stellar performance in Man Utd’s win over Tottenham on Sunday, and Juan Mata looked as though he certainly enjoyed it.

The United goalkeeper produced save after save in a brilliant display to keep a clean sheet at Wembley, and importantly he helped secure all three points for his side after Marcus Rashford’s goal proved to be the winner.

De Gea made 11 saves in total as he frustrated Spurs in the second half in particular, and as seen in the video below, Mata didn’t know how to react as he made his way onto the pitch to congratulate his compatriot.

He looked in shock and awe simultaneously at first before embracing him, as he will fully appreciate the influence that the shot-stopper had in making it six consecutive wins for Ole Gunnar Solskjaer since he was appointed interim boss last month.

Widely regarded as the best goalkeeper in Europe currently, De Gea certainly strengthened that argument on Sunday as he stood up and made the difference for his side to keep their momentum going. Mata looks as though he still can’t quite believe how good he is though!

Find someone who looks at you the way Juan Mata looks at David De Gea… ?