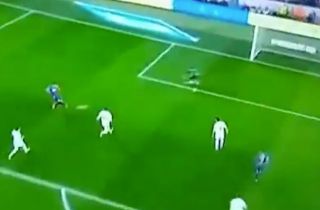 Barcelona wasted little time in finding a breakthrough against Eibar at the Nou Camp on Sunday with Luis Suarez scoring their opener.

The Catalan giants were under pressure to respond after title rivals Atletico Madrid won earlier in the day to close their lead to just two points at the top of the La Liga table.

However, they made an ideal start in the opening 20 minutes as Philippe Coutinho linked up brilliantly with Suarez to carve the Eibar backline apart, as seen in the video below.

Their two-man move ended with a wonderfully composed finish from the Uruguayan stalwart, and coach Ernesto Valverde will be delighted with the way in which they combined to create the opportunity.

Having found a breakthrough so early on, the hosts will fancy their chances of going on to secure a comfortable win and restore their five-point advantage at the top of the standings.

What a goal by Suarez, immense link up with Coutinho too ? pic.twitter.com/RDG0X4vCzL