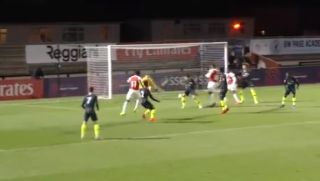 Arsenal wonderkid Bukayo Saka scored a delightful solo effort in an Under 23s clash against Manchester City, showing once again what a talent he is.

The 17-year-old is one of the most highly rated prospects coming through at Arsenal at the moment, and already has four first-team appearances to his name.

If he carries on scoring goals like this, it’s surely only a matter of time before Unai Emery has to consider him a superior option to inconsistent performers like Alex Iwobi and Henrikh Mkhitaryan.

For now, enjoy this fine piece of footwork before a very decent finish as well from Saka against City…