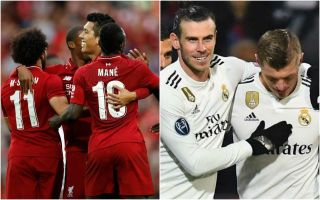 Liverpool could reportedly be offered the chance to seal the transfer of Real Madrid midfielder Toni Kroos as they eye up a potential swap deal for Mohamed Salah.

This is according to Spanish outlet Don Balon, and, while Kroos would undoubtedly be a tempting signing for any top club, we imagine Liverpool won’t be accepting this any time soon.

The Germany international is one of the finest midfield players in the world and has been linked by Don Balon with Manchester United as well in recent times, where he’d undoubtedly fill an important role after the retirement of Michael Carrick in the summer.

At Liverpool, however, they already have players like Fabinho, Naby Keita, Jordan Henderson, James Milner, Georginio Wijnaldum and the injured Alex Oxlade-Chamberlain as among their central midfield options.

So while ever player – even Salah – has his price, it would surely take more than this for the Reds to part with their Egyptian goal machine.

It remains to be seen how much of a priority Kroos still is for United, but one imagines they’ll be keeping an eye on this if the 29-year-old is being offered around in swap deal proposals.