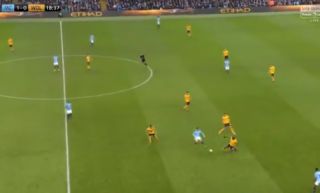 Wolves star Willy Boly was shown a straight red card in today’s game against Manchester City at the Etihad Stadium for a truly shocking challenge on Bernardo Silva.

Already a goal down after Gabriel Jesus slid in to give City a 1-0 lead, Wolves are now also down to ten men after this moment of madness from Boly.

Watch a video of the incident below, with Boly going in two-footed when there was absolutely no justification for doing so.

Thankfully Silva was alright, but this is not the kind of challenge we want to see and it’s right that he was instantly dismissed by the referee.

Willy Boly is dismissed for his lunge on Bernardo Silva. Was it harsh?