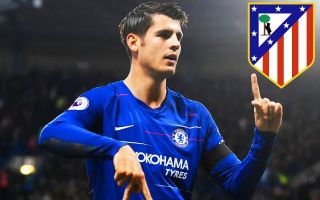 That man is their former star Diego Costa, who has struggled since leaving Stamford Bridge for the Spanish capital last season.

Costa was a big hit in his time at Chelsea, with Morata proving a poor quality replacement in the end after a dire spell in English football.

With Sky Sports now reporting Morata could be the next Blues attacker to make his way to Atletico, a number of the club’s fans are calling for the return of Costa.

It remains to be seen if this is at all realistic for Chelsea, but it would certainly be a popular choice if they could do it.

While Costa initially left west London under a bit of a cloud, he clearly remains highly thought of by these fans at least…

Atletico wants Morata? A swap deal with Costa is needed.

Looks like Morata is off to Atletico, can we have our Costa back ?

Alvaro Morata OUT.
Diego Costa IN.

That would be some deal #CFC

Give us Costa and take morata plus cash

If Athetico want Morata, Chelsea should try to bring back Costa ?????

If we are going to sign an out of form striker, why not try a Costa for Morata swap? #SillySeason