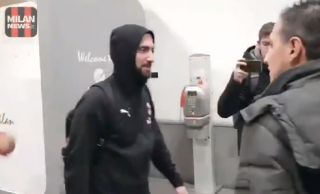 AC Milan striker Gonzalo Higuain was asked about rumours linking him with an imminent transfer to Chelsea at the airport.

The Argentina international, on loan at Milan from Juventus, is expected to become a Chelsea player on loan for the rest of the season, according to tweets last night from reliable Italian journalist Fabrizio Romano.

MORE: Chelsea star takes to Twitter to respond to rumours he’s set to come out as gay

However, when quizzed about his future, Higuain did not appear keen to give anything away.

His quotes are roughly translated as: ‘Were you waiting for me? Chelsea? If you are looking for a mess with me, you will never find it.’

Chelsea fans will hope something can be made official soon as the 31-year-old looks exactly the kind of striker they need to come in as an upgrade on Alvaro Morata at Stamford Bridge.