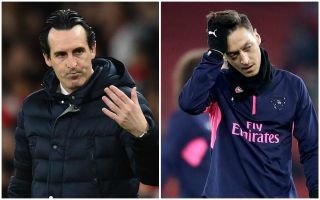 Mesut Ozil has insisted that he’s raring to go this weekend, but some have interpreted the Arsenal star’s tweet as a dig at Unai Emery.

The 30-year-old has struggled in recent weeks to secure a regular spot in the Arsenal starting line-up, as he even failed to be selected in the squad against West Ham United last weekend despite seemingly recovering from a knee injury.

That in turn has led to speculation over his future with the Gunners, but as noted by BBC Sport, Emery was quick to shut those rumours down this week but issued a challenge to his German playmaker to be more consistent.

Whether it was merely meant as an innocent update to his followers on his fitness or a genuine dig at his Arsenal boss to suggest that he has ‘another’ full week of training under his belt, many have interpreted Ozil’s tweet on Friday as the latter, as seen in the comments below.

Some Arsenal fans have deemed it a clear message to Emery to make it clear that he’s ready to play against Chelsea in the evening kick-off on Saturday, but time will tell whether or not he is firstly included in the match-day squad and beyond that if he is given a starting berth.

Ozil has four goals and two assists in 16 appearances so far this season, and all parties concerned will surely be desperate to see him in top form helping the Gunners to compete on multiple fronts between now and May.

Whether or not Emery gives him the opportunity do so though is the key factor and it remains to be seen if Ozil has a role to play this weekend to start things off in his bid to get back in the side on a regular basis.

Haha these ‘full training’ tweets have a hidden message surely..

Now, he is just mocking Emery.

This caption and L. Firing shots on someone. Hmm

Yeahhh!! Stay put, stay strong! And keep updating us with your status.. this was a class dig at what @UnaiEmery_ is doing!

If Unai leaves you out I’m going to sue him. No Özil. No Party

The manager said u should be ready for tomorrow’s game. If u don’t play, just leave bro. Makes no sense staying and being wasted…..