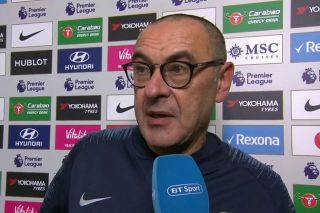 Chelsea boss Maurizio Sarri was far from impressed after his side’s defeat to Arsenal on Saturday, and he let his players know publicly.

The Blues were second best at the Emirates throughout in their 2-0 loss, and they certainly struggled once again to create any meaningful opportunities in the final third.

SEE MORE: ‘Tom Cleverly in disguise’ and ‘as useful as Drinkwater’ – These Chelsea fans react to star’s poor performance vs Arsenal

With that in mind, the pressure will undoubtedly be building on Chelsea in the coming weeks to produce a positive reaction, but Sarri clearly isn’t happy with the attitude and approach of his players and slammed them for it in his post-match comments, as seen in the tweet below.

It remains to be seen how his squad will react to being criticised publicly for being ‘difficult to motivate’, while perhaps the impending arrival of Gonzalo Higuain, as per the Guardian, could be a major boost to give them fresh impetus and real quality in the final third to fire them back into form.

The Argentine worked with Sarri at Napoli, and so will undoubtedly be immediately fully aware of the expectations and demands that the Italian tactician has.

However, based on the assessment below, it’s perhaps a little more concerning for Chelsea fans if Sarri can’t motivate the squad to match Arsenal’s determination in such an important fixture.

Sarri starts with a message to his players: ‘I’m extremely angry, very angry indeed. This defeat was due to our mentality. I can’t accept it. We had a similar issue against Tottenham in the league. It appears this group of players are extremely difficult to motivate.’ #ARSCHE

"I am extremely angry. They were mentally more determined than we were."

"As a group of players they're not particularly aggressive from a mental point of view."

"It is something that is difficult to change."