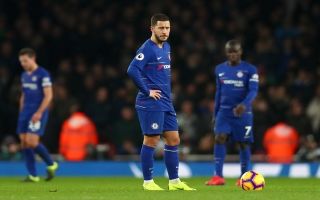 Maurizio Sarri’s Chelsea looked a gear behind Unai Emery’s Arsenal for the majority of this evening’s matchup, the Blues were too passive at times and they paid the price.

A look at the goals that Chelsea conceded today say it all about the team’s performance really, there was a obvious lack of fight and desire in the side which allowed Arsenal to capitalise and score twice.

Whilst Alexandre Lacazette’s goal can be written off if you’d like for the Frenchman’s excellent footwork and ability to craft a chance from absolutely nothing, the same can’t be said for the second goal that the Blues conceded.

Laurent Koscielny – an obvious threat in the air – was left completely unmarked, Koscielny was so confused that he ended up scoring with his shoulder instead of his head. A look back at the footage will show that this wasn’t and individual mistake but in fact a calamitous defensive error.

Sokratis picking out Koscielny – who is surrounded by 5 Chelsea players – on the half-volley with the outside of his boot.

In no circumstance should a ‘punt’ from Sokratis lead to a goal in this situation – but it did somehow. Five Chelsea players shirked their responsibilities in this moment and the Blues were simply not good enough today.

One man who was blasted by Chelsea fans for his performance was summer signing Jorginho, the Italian joined as Sarri’s on-field general for a fee reported to be £57m by the Independent but the midfielder doesn’t seem to be marshalling anything useful for the Blues.

Check out some fan reaction below:

90 minutes I’ll never get back in my life. Useless.

– Sarri has no plan B, should have made half-time subs
– Jorginho is just Tom Cleverley in disguise
– Hazard is disinterested playing false 9
– Azpi/Alonso are too slow to execute this system
– We need Higuaín and Paredes right now
– Arsenal could have scored 5

Can we talk about the fact that Jorginho can’t complete a pass over about 5 yards… Seems like he’s somehow not taking any of the blame. Hoping it’s a blip, but he’s been absolutely dreadful of late. Like, seriously bad… #ARSCHE

Jorginho and his coach thought EPL was just smoking cigarette and making 3million passes a season??

Can someone please explain to me what exactly Jorginho does other than pass the ball five yards to the side? Contributes nothing. #ARSCHE

Imagine registering 2000+ passes but not a single one of them is an assist ?? Jorginho is a fraud pic.twitter.com/hKQP9gGyz4

Jorginho is no longer effective , he’s been found out we too predictable

Jorginho is rubbish, the Italian Mikel is dreadful at passing #ARSCHE

Jorginho is a fraud.
He cannot give one accurate forward pass

It’s about time Jorginho is dropped. He’s been dreadful. About as useful as Drinkwater these last few games and needs dropping #ARSCHE

Chelsea need a lift and they need it quickly or they could see themselves fall out of the top four which will certainly result in Roman Abramovich giving Sarri his marching orders at the end of the season.

“I don’t like it, I hope it doesn’t happen” – Liverpool star James Milner fights to save football in superb post-match interview
More Stories Jorginho Maurizio Sarri