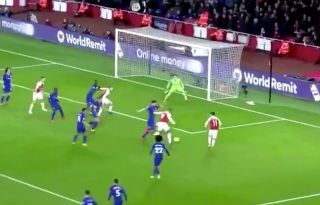 Arsenal wasted little time in finding a breakthrough against Chelsea as Alexandre Lacazette fired them ahead in the opening 15 minutes at the Emirates.

It’s a crunch clash between the two rivals as they battle for a top four finish in the Premier League this season and so the outcome could be vital with Man Utd also closing the gap on them in recent weeks.

SEE MORE: ‘Have you lost it?’ – These Arsenal fans fume with Unai Emery decision for Chelsea clash

In turn, Chelsea suffered a key setback early on as Lacazette collected the ball in the box and after some sharp play and close control, he made enough space for himself before producing an excellent controlled finish past Kepa Arrizabalaga, as seen below.

Given Arsenal’s leaky defence this season, they’ll now have to show the same level of quality at the other end of the pitch to try and protect their lead and secure three crucial points.