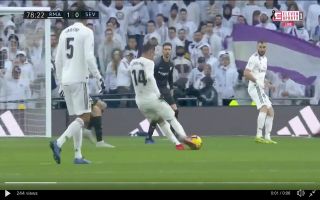 Real Madrid anchor man Casemiro reminded those who might have forgotten the fact that he only scores ‘worldies’ by scoring an absolute rocket for Madrid vs Sevilla.

Casemiro became the unlikely hero for Los Blancos by scoring  in the 78th minute of their tie against Sevilla, the Brazilian’s goal well and truly sent them on the way to victory.

Casemiro picked the ball up from about 40 yards out after a majestic dummy by midfield maestro Luka Modric, the 26-year-old looked up at goal before smashing his long-range effort into the top corner.

Check out Casemiro’s sensational strike below:

Santiago Solari’s side are now third in La Liga and whilst they may be able to overtake local rivals Atleti, lifting the La Liga title is unlikely. Barcelona will have a ten point lead at the top if they are to beat Leganes tomorrow.