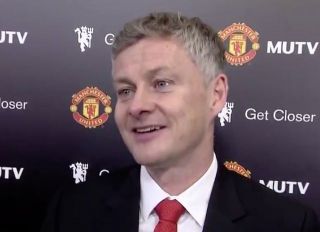 Man Utd interim boss Ole Gunnar Solskjaer saw his side claim a seventh consecutive win and conceded he is loving life at the helm.

The Red Devils claimed a 2-1 win over Brighton at Old Trafford on Saturday as they extended the winning run under the Norwegian boss since he replaced Jose Mourinho last month.

SEE MORE: ‘World at his feet’ – HUGE praise for Marcus Rashford from Man Utd teammates after starring role in win

As they continue to close the gap on their rivals in the top four, Solskjaer couldn’t hide his delight over how things are going since he was appointed, as his side continue to pass tests and answer questions with their victories.

“We should have maybe played the game out better than we did as the last 15 minutes we were under it,” he said in his post-match interview. “Marcus Rashford has been top class. You start with work rate. He has that, works like no one else, runs channels, holds the ball up. He has now calmed down in front of goal and he’s assured and is practising all the time. Now he’s confident.

“I can’t complain can I? I am smiling and this is one of these things I will remember for the rest of my life. It’s been a roller coaster and it’s class to be here.

“They do dig deep. The boys showed against Tottenham and today that we don’t give up and there’s a great team spirit. You can’t always play fantasy football. At times we did and it’s a great three points.

“What a finish from Marcus. The way he finished it off. It is great working with him. That was his 150th game, I think he has scored more than a couple of the legends we have so he has a great future ahead of him.

“Today we were tested. I didn’t think we played the game out as we should have. That’s perhaps the next challenge for the boys.

“The last month has been fantastic. It’s one of those things. It is real now. To be fair, it does feel like coming home. I do feel at home and I really enjoy it.”

United are next in action against Arsenal in the FA Cup on Friday night as they look to continue their impressive run across all competitions.