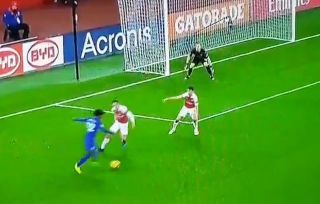 Chelsea were second best in the first half against Arsenal, but efforts like this from Willian certainly didn’t help matters for the visitors.

Goals from Alexandre Lacazette and Laurent Koscielny ensured the Gunners were in full control, with Chelsea struggling to make any inroads in attack.

Despite picking up the ball in some dangerous positions, Willian couldn’t find an end product, especially not on this occasion as he ballooned his effort well wide and it eventually ended up going out for throw-in, as seen in the video below.

Unsurprisingly, it didn’t go down well with the Chelsea faithful, as seen in the tweets below, as they slammed the Brazilian ace who continued to disappoint thereafter.

It remains to be seen if Chelsea can find a way to get something from the game, but Willian in particular is going to have to be much more accurate than this moving forward to offer them a genuine threat in the final third.

I CAN’T WITH WILLIAN FFS pic.twitter.com/xpKha2TDgC

Willian has always been the worst

How is this guy still getting in the starting line up??

There’s still time to get Willian on a flight to Barcelona tonight!

I’ve lost words for how poor Willian is. As a professional football player his decision making is terrible. I’ve had better teammates at our pick up and recreational football in the US #ARSCHE