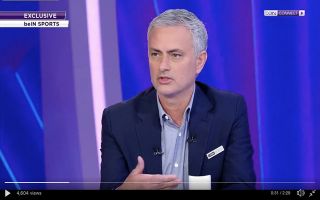 Mourinho was speaking on the subject as part of his role as a pundit for beIN SPORTS, this is the 55 year olds first job since being sacked as United boss last month.

The former Chelsea boss used Didier Drogba as an example of a player who dealt well with added pressure, the Portuguese professed that Drogba was a “proper man” and not a “spoilt man”, the underlying tone was that Mourinho was blasting some of the players he’s worked with.

I wonder who that could be?

Mourinho also added that a player he recently coached (surely a Manchester United player), asked Mourinho to stop criticising him in front of his teammates and rather do it in private. This player was more concerned with their ego being damaged than bettering their skills and effort in training.

No wonder United were in such a rut under Mourinho with attitudes like this.

Check out what Mourinho had to say on the incident below:

The Red Devils have enjoyed massive success since Ole Gunnar Solskjaer was appointed as Mourinho’s short-term successor, the Norwegian has managed to lead the Old Trafford outfit to fifth in the league, just three points behind Chelsea.

Solskjaer could defy the odds and qualify for Champions League football with United.