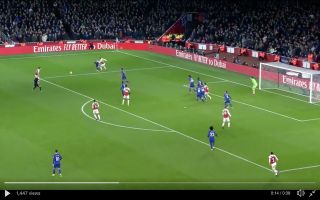 Arsenal captain Laurent Koscielny handed the Gunners a two goal lead vs Chelsea with a no-look effort that even Roberto Firmino would be proud of.

After an Arsenal free-kick, the ball dropped to Koscielny’s centre-back partner Sokratis, the former Dortmund man had a punt which paid off.

His shot/cross/clearance (we seriously don’t know what it was), dropped perfectly for Koscielny and in the Frenchman’s attempts to head the ball into the back of the net he hilariously shouldered the ball over the line.

Maurizio Sarri will be livid with Chelsea as their defensive line was completely asleep leaving Koscielny free to score, none of Chelsea’s players looked bothered enough to react to the ball dropping in their own box.

Koscielny somehow came out on top despite being surrounded by five Chelsea shirts, truly disgraceful defending from the Blues.

Since returning from a lengthy injury layoff, Koscielny has been in a staple in Emery’s side and the veteran defender won’t forget scoring such an important goal in a massive game for both clubs.