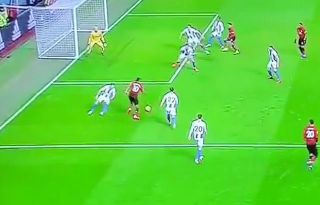 Man Utd forward Marcus Rashford is in fine form and he showed his class with a great goal in the clash with Brighton on Saturday.

The Red Devils are looking for a seventh straight win under Ole Gunnar Solskjaer as the Norwegian tactician has led an impressive turnaround since replacing Jose Mourinho last month.

One of the real positive aspects of his tenure has been the form of Rashford and other key players like Paul Pogba, with both players getting on the scoresheet at Old Trafford this weekend.

After Pogba found the back of the net from the penalty spot, Rashford doubled their lead with this fine effort, as seen in the video below.

Diogo Dalot deserves credit too for his role in the build up, but the finish from the England international was top class as United look well on course to secure another three points.

Rashford what a goal