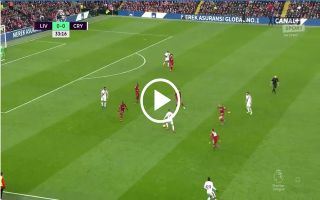 In the 33rd minute of the match all guns were blazing and Jurgen Klopp’s Reds pressed the Palace back line with all their might, James McArthur stayed calm in the storm and managed to launch a counter attack despite being surrounded by red shirts.

The ball made its way up to star man Wilfried Zaha and the Ivorian showed his fantastic footwork by skipping past makeshift right-back James Milner like he wasn’t there. Andros Townsend made an instinctive run into the box and was picked out by Zaha, Townsend’s first-time shot sent the Eagles into the lead.

Townsend puts up 1-0 up against the league leaders ? #CPFC #LIVCRY

Liverpool need to create a lot more chances in the second half if they want to come away from today’s game with a win.

Check out some reaction to the Zaha vs Milner mismatch:

Zaha vs Milner what did we expect?

Zaha 1v1 against James Milner, Clyne nowhere to be seen

Milner is actually finished with running, Zaha had him for dinner there. Why tf does Trent have to be injured

Milner has the pace of a turtle

Zaha is tearing Milner a new one but Klopp wants to keep letting players go.