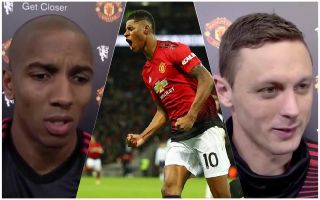 Marcus Rashford helped lead Man Utd to a win over Brighton on Saturday, and his teammates couldn’t help but lavish him with praise after the game.

The 21-year-old scored a brilliant goal to secure a 2-1 victory, as he also became the youngest United player ever to score in four consecutive Premier League games.

He’s been in fine form since Ole Gunnar Solskjaer took charge, and it has been noticed by his teammates with both Ashley Young and Nemanja Matic singling him out for praise after the game.

“Marcus Rashford is an unbelievable talent. I have said it since he was in the youth team. He has the world ahead of him and can be one of the best in the world. I think he was off balance and still found the net,” Young said in his post-match interview.

Further, Matic reiterated that point below as he insisted that the England international is one of the best players in the league right now, and with his current form in mind, it’s difficult to disagree.

The test now though will be maintaining that until the end of the campaign to help Man Utd secure a top four finish, something that seemed so unlikely last month under Jose Mourinho.

? “He’s one of the best players in the league.”@NemanjaMatic is full of praise for @MarcusRashford! #MUFC pic.twitter.com/F1MaSxatUV