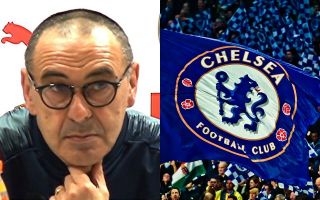 It seems a number of Chelsea fans have not taken well to the comments of manager Maurizio Sarri following the 2-0 defeat to Arsenal yesterday.

Goals from Alexandre Lacazette and Laurent Koscielny gave the Gunners all three points in what was a fairly comfortable victory in the end at the Emirates Stadium.

Sarri started well at Stamford Bridge before a recent dip, with Chelsea now not looking at all convincing as a top four spot is surely the best they can hope for by the end of the campaign.

Fans will be disappointed not to see more of an improvement in Chelsea since Sarri came in to replace Antonio Conte after last season’s hugely disappointing season in which they finished 5th in the Premier League.

Still, it seems Chelsea fans don’t have any sympathy for Sarri as he seems to encounter the same problems Conte did in terms of motivating this group of players.

This suggests it really could be the players more than the managers, but despite BBC Sport quoting the Italian tactician as slamming his team after the Arsenal loss, these fans have hit back at the manager.

How does Sarri expect his players to be motivated to perform if they know they’ll start the next game regardless? He’s every bit as responsible for this mess as the team.

"This group of players are extremely difficult to motivate."
That was Maurizio Sarri's reaction in his post-match press conference.

Pathetic! Absurd!! and disgraceful to hear this from any manager.
He has started losing it and if he doesn't reorganise himself, he will leave soon

I can't wait until there's a player revolt against Sarri because he's so clueless, no strategic maneuvers or tactical awareness. We all see it. He doesn't. Can't watch such rubbish. No team balance. ??????#KanteInJorginhoOut #ARSCHE

Sarri been in the job for 6 months now yet idiots telling me 'Rome wasn't built in a day'. Every passing game shows how clueless he is, no tactics, all we do is pass the ball around without any fluidity.

When a man is clueless he starts blaming his working tools.. What nonsense is Sarri talking about?
Kante & Hazard – out of position
Jorginho – visionless and useless
Alonso – better as a sub.

Why is Sarri complaining? If he continues like this, he would be jobless very soon. pic.twitter.com/ky1ghvXwhl

Sarri is an asshole then keeps complaining abt the team alonso is shit for weeks now play emerson https://t.co/yU9Li33VeW

This doesn’t read well. If Sarri is already complaining about players we all know how this ends. Plus you can’t blame the players then play the same ones week in week out. Change it up and make people fight for their place https://t.co/oiI5ZolZmm

Sarri is gradually losing it, somebody should tell him that Chelsea is not Napoli. Roman can sack him after a game because of his stubbornness. #ARSCHE