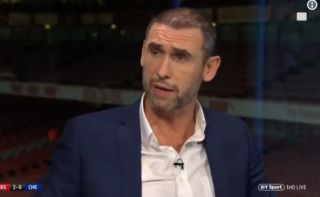 Martin Keown and Rio Ferdinand brutally exposed the flaws in Maurizio Sarri’s Chelsea tactics after the 2-0 defeat to Arsenal on Saturday.

First, in the clip below from BT Sport, Ferdinand highlights Jorginho’s lack of impact in a deep-lying midfield role, slamming his lack of ability to run and do his job defensively.

Keown also points to N’Golo Kante being used in a more attacking role by Sarri, in what must be one of the most bizarre tactical decisions for a long time.

As the former Arsenal defender sums up perfectly, the France international is one of the best midfielders in the world but is being made to look ordinary in this Chelsea side.

? No assists
? Can't run
? Not a great defender @rioferdy5 doesn't hold back when talking about Chelsea's Jorginho… pic.twitter.com/VSNwMgAIAa