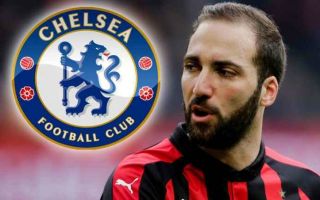 Gonzalo Higuain is reportedly set to earn a whopping £270,000 a week upon sealing a transfer to Chelsea on loan this season.

The Argentina international is seemingly close to finalising his move to Stamford Bridge, though the Blues will be disappointed not to have been able to give him a debut in yesterday’s game at Arsenal, which ended up in a 2-0 defeat.

Chelsea played without a striker at the Emirates Stadium, which just illustrates how much of a problem position the centre-forward spot has become for the club.

Higuain should fix it, so little wonder the Daily Star claims CFC are ready to pay Higuain big money to join this winter, with the report stating his wages will take him above Manchester United’s Romelu Lukaku as the fifth highest earner in the Premier League.

Many of the other players in the top five are so at United – such as Paul Pogba and Alexis Sanchez, which just shows how much Chelsea are pushing the boat out for this particular signing.

Chelsea fans will now just hope this long-running saga can become official as soon as possible as they urgently need more firepower to turn around this recent slump in form.