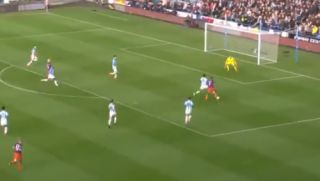 Manchester City star Raheem Sterling was denied what looked a clear penalty against Huddersfield this afternoon, leaving many fans on Twitter stunned.

While the England international has a bit of a reputation for going down easily, there seems no doubt about this decision – and it’s the wrong one.

City went ahead through Danilo not long afterwards anyway, but some fans were far from impressed with the referee here, accusing him of Liverpool bias.

City need to win to keep up the pressure on the league leaders, but clearly some feel this ref didn’t want to see City take the lead…

@GNev2 ref is a Liverpool fan with Huddersfield 1st goal on Acca ??

Wtf the ref must be a liverpool fan. How is that not a penalty?

The ref must be a Liverpool fan #HUDMCI