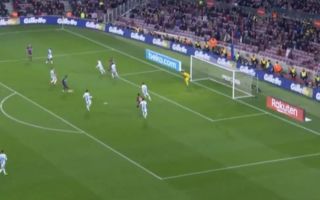 Ousmane Dembele was on hand to apply the finishing touch to a fine team move from Barcelona this evening to give the Blaugrana a 1-0 lead against Leganes in La Liga.

With just over half an hour played, the score between Barca and Leganes was 0-0, however Dembele soon stepped up to give the home side the lead with a fine finish.

The goal came after a dazzling run from Gerard Pique saw him beat a number of Leganes players before finding Dembele, whose delayed one-two with Jordi Alba saw him fire home from inside the area.

The goal can be found below. What a run that was from Pique!