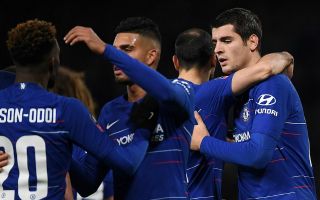 Chelsea striker Alvaro Morata’s transfer to Atletico Madrid is a done deal, Italian journalist Fabrizio Romano claims to have had it confirmed to him.

Speculation surrounding Chelsea and their ins and outs up front this January have been going on for some time, with Morata one of the players involved in it all.

MORE: Conclusion to Higuain Chelsea transfer saga hinges on talks in next 48 hours

The Spain international has majorly flopped in his time at Stamford Bridge and now looks set to return to La Liga, though it’s not clear from Romano if this is on loan or permanently.

Morata could be a decent signing for Atletico if he can regain his confidence, which has looked shot for much of his career in the Premier League.

The 26-year-old did, however look a decent player at Juventus and Real Madrid earlier in his career, so could perhaps just do with a fresh start.

Chelsea, meanwhile, will hope to bring in Gonzalo Higuain as Morata’s replacement within the next 48 hours, according to David Ornstein.