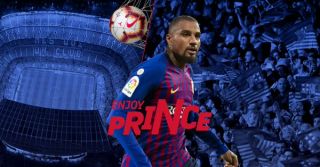 Barcelona have confirmed the loan signing of Kevin-Prince Boateng from Sassuolo, as he joins the Catalan giants for the rest of the season.

The 31-year-old had enjoyed a decent spell with the Serie A outfit so far this season, scoring five goals and providing two assists in 15 appearances.

After the departure of Munir El Haddadi earlier this month, Barcelona had an area to address given the lack of depth behind Luis Suarez up front.

For a side looking to compete on multiple fronts for the remainder of this season, more was undoubtedly needed, and as confirmed on their official site, and in their tweet below, Boateng has been signed as the short-term solution.

Nevertheless, it’s added that Barcelona have the option to make it a permanent move in the summer for €8m, and so it remains to be seen whether or not he does enough to earn a prolonged stay at the Nou Camp.

In truth, although it is perhaps an underwhelming signing for most given his age and having played at a lower level in recent times for Las Palmas, Eintracht Frankfurt and Sassuolo, Boateng can offer a potentially important option to coach Ernesto Valverde.

With his versatility allowing him to not only play in various attacking roles but also as a No.9, the former AC Milan star could prove to be a key addition with Barcelona still in the hunt for major honours both at home and in Europe.

Aside from his goal threat, his tenacity, work-rate and energy could also help offer the right balance to allow the likes of Lionel Messi and Philippe Coutinho to flourish by doing the ‘dirty work’ for them.