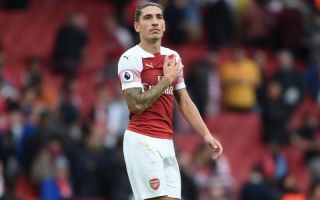 Arsenal defender Hector Bellerin reportedly faces at least six months out after he sustained a serious knee injury against Chelsea at the weekend.

The 23-year-old suffered the setback in the second half at the Emirates in Arsenal’s 2-0 win over their rivals, with replays showing that it didn’t involve any contact from a Chelsea player.

Instead, Bellerin merely collapsed under his own weight, and the early signs were concerning as he was stretchered off the pitch in visible distress.

Sadly for the Spaniard and the Gunners, The Guardian have provided an update on his status, and it’s reported that he has sustained a ruptured cruciate knee ligament with the suggestion that he will now face at least six months out of action.

With further tests expected to be carried out, they could uncover further damage and so that is perhaps an optimistic timeframe on his recovery.

What seems pretty clear from the report though is that Bellerin is now ruled out for the rest of this season, and so he’ll arguably be hoping that he can work hard over the summer to make a full recovery and make himself available to Unai Emery at the start of next season.

Time will tell if the extent of the injury allows him to do so, but having only just come back from a calf problem, the last thing that he’ll want to do is rush back and risk another setback.

As per Sky Sports, Arsenal aren’t expected to sign a replacement this month, and so that would suggest that Emery is confident he has enough cover at his disposal to cope with the setback in the coming months with another decision perhaps set to be made in the summer.

The priority though will undoubtedly be on helping Bellerin make a full and swift recovery.