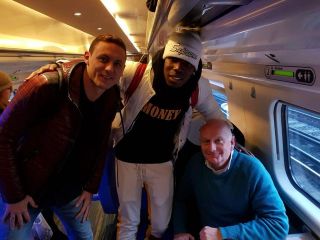 Man Utd pair Paul Pogba and Nemanja Matic irked a couple on their train journey and despite apologising, the couple had no idea who they were!

As seen in the tweet below, the United duo were busy keeping themselves entertained on the train with a game of Uno, but it appears as though their noisy ways landed them in trouble.

They apologised to the couple in question and offered a photo to them, but hilariously they had no clue who the Man Utd stars were and mistakenly took the gesture as Pogba offering to take a photo of them.

That then leads us to the Twitter thread below from Nate Patrick, who details the entire meeting between his parents and a World Cup winner, where he hilariously loses it over his dad being completely oblivious as to who he’s just met.

Given Pogba’s influence and commercial work on and off the pitch and what he has achieved, it’s difficult to see how he could go unrecognised. However, this couple and their son now have a great tale to tell…

Just Paul Pogba and Nemanja Matic enjoying a game of uno on the train ?

I can’t believe this.