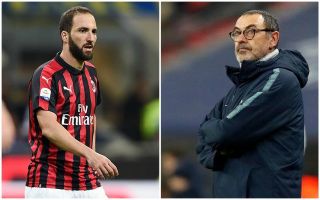 Chelsea manager Maurizio Sarri has been given a pretty bleak warning by former Blues striker Tony Cascarino as the club look set to clinch the transfer of Gonzalo Higuain.

The Express report that Higuain’s move to Stamford Bridge is close to completion as he prepares to jet in to London tomorrow to finalise his loan from Juventus.

The Argentina international, however, could represent the last roll of the dice for Sarri after his troubled time at Chelsea so far, according to Cascarino.

Speaking to talkSPORT, the pundit explained that his old club are not exactly patient with managers, and a big signing like this has to go right for the Italian tactician to get much time.

‘Chelsea fans know this has been coming – look at their goal return in recent weeks. They just don’t look like a side that’s going to create,’ Cascarino said.

‘So the last throw of the dice is Higuain because otherwise I don’t think he (Sarri) will last until the end of the season.

‘And if he gets to the end of the season, he won’t get into next season.’

CFC lost 2-0 to Arsenal on Saturday in another unconvincing display that has plagued much of their season following an initially bright start.

"Chelsea are not a club that will be patient."

"I think Higuain is Sarri's last throw of the dice."@TonyCascarino62 has his say on the #CFC boss. pic.twitter.com/bNdAPHCqI2

Questions are now being raised over Sarri’s style of football, with players like Eden Hazard and N’Golo Kante not looking anywhere near their best in the way they’ve been used in the former Napoli boss’ system.

As there hasn’t been a big improvement on Antonio Conte’s final campaign in west London, could Sarri really soon be in danger of the sack as well?