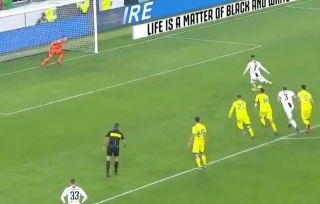 Cristiano Ronaldo remains the joint-top goalscorer in Serie A this season, but the Juventus superstar could have moved ahead of his rivals on Monday night.

The 33-year-old has bagged 14 Serie A goals and five assists thus far, putting him level with Fabio Quagliarella and Duvan Zupata at the top of the charts.

He was given the ideal opportunity to move clear against Chievo on Monday, but he couldn’t convert his penalty in the second half in Turin.

As seen in the video below, credit has to go to Stefano Sorrentino who pulled off a brilliant save to deny the Portuguese forward, but ultimately many would have expected Ronaldo to pounce on the chance and add to his tally for the campaign.

Despite that miss, it has been an impressive start to life in Italy since his move from Real Madrid last summer, as his goal last week helped Juventus claim their first piece of silverware for the season as they defeated AC Milan in the Supercoppa clash in Jeddah.

Ronaldo reminding us that he is human ? pic.twitter.com/hPLt9S55cZ