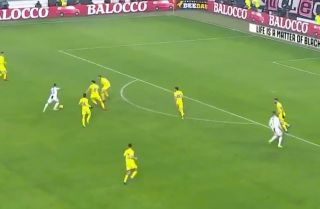 Juventus were back in action in Serie A on Monday night, and Douglas Costa fired them into an early lead at home against Chievo with a great goal.

The Bianconeri claimed their first piece of silverware for the season last week, beating AC Milan in Jeddah to secure the Supercoppa.

After Napoli’s win over Lazio on Sunday closed the gap at the top of the Serie A table to just six points, Massimiliano Allegri’s side were back in Turin looking to restore their healthy lead at the top of the standings.

The home faithful didn’t have to wait long for a breakthrough, but it was certainly worth their while as Douglas Costa took aim from outside the box and struck a brilliant effort into the back of the net, as seen in the video below.

The 28-year-old has struggled to make a decisive impact so far this season, as it was his first goal of the campaign while he’s managed just two assists in 20 outings.

Nevertheless, with Juventus still competing on multiple fronts and with Allegri rotating his squad, the Brazilian international will undoubtedly have a key role to playing in the coming months as they go in search of major honours.

Douglas Costa with a screamer for Juventus! ? pic.twitter.com/v97iQyg2Ef

Juventus ace departs on a season-long loan to Brazilian giant