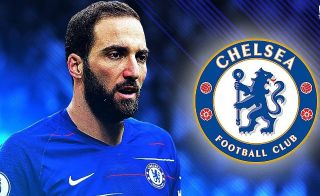 Chelsea will reportedly wrap up the signing of Gonzalo Higuain on Wednesday, as he’s expected to arrive in London in the morning.

As noted by Sky Sports, AC Milan’s signing of Krzysztof Piatek from Genoa to essentially replace Higuain was the first major breakthrough on Tuesday.

Now, according to Calciomercato, it’s suggested that the 31-year-old will fly to London on Wednesday morning where he will undergo his medical and complete the formalities to seal his loan switch from Juventus after cutting short his season-long loan deal with Milan.

It’s been a difficult season thus far for the Argentine international, as he’s managed just eight goals in 23 appearances as he struggled to successfully lead the line for the Rossoneri.

However, he’ll be hoping that a reunion with Maurizio Sarri at Stamford Bridge helps him to rediscover his best form, having enjoyed the most prolific campaign of his career to date under the Italian tactician having scored 38 goals in 42 games in the 2015/16 season at Napoli.

Time will tell if he is able to replicate that form, as it would certainly be welcome with the Blues looking to compete for major honours while also battling for a top four finish in the Premier League.

Having scored just 40 goals in 23 league games so far this year, Chelsea have the lowest scoring tally of the top six, and so they’ll certainly hope Higuain can help improve that.

Meanwhile, it’s added in the report that in order for him to make his debut immediately in the League Cup semi-final clash with Tottenham on Thursday night, Chelsea will have to register him by 12pm on Wednesday.

Given he’s only landing in England in the morning, it could be an anxious rush to ensure he’s available as Sarri’s men look to overturn a one-goal deficit from the first leg.