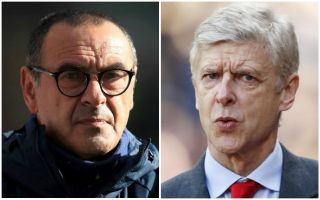 One Chelsea fan is absolutely fed up with manager Maurizio Sarri already after a few dismal performances this season.

Watch this incredible interview on talkSPORT as Simon absolute rips the Italian tactician to shreds over his philosophy and two of his signings in Jorginho and Mateo Kovacic.

Sarri started well at Stamford Bridge after impressing at Napoli, but it all seems to have gone a bit pear-shaped for the Blues in recent games.

Chelsea’s last match was a poor performance in a 2-0 defeat away to Arsenal, and it does seem like a number of key decisions by Sarri could be behind the team’s current slump.

Still, is it a bit soon to be calling for his head at Chelsea? This guy clearly doesn’t think so!

Watch the video below for this incredible anti-Sarri rant – is he being fair, or are Chelsea fans just too used to sacking managers being the answer to all their problems?

Do you get the feeling Simon the #CFC fan isn't happy at the moment? ? pic.twitter.com/si57VqHy6m