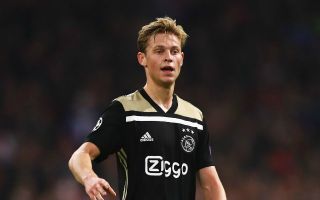 Manchester City’s struggles to seal the transfer of a top class midfield player have taken yet another blow as they look set to miss out on Frenkie de Jong.

The Ajax starlet is one of the most highly rated young talents on the planet at the moment, and could have been an ideal long-term Fernandinho replacement for City.

However, De Jong now looks most likely to seal a move to Paris Saint-Germain, who have been more willing to pay big for the Netherlands international, according to the Metro.

This is undoubtedly becoming a bit of a worrying trend for the Premier League champions, who were also beaten to the signing of Jorginho by Chelsea last summer, as also noted by the Metro.

De Jong has shone in the Eredivisie and could now be set to make the step up to a more competitive league.

In fairness to City, that probably is a bit much for a player who, although talented, remains relatively unproven at the highest level.