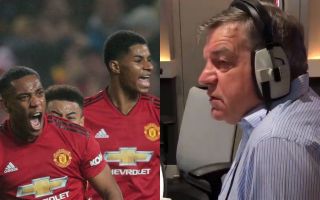 Former England manager Sam Allardyce has given a surprisingly bleak prediction over the career of Manchester United forward Marcus Rashford.

The 21-year-old has long been one of the country’s most exciting young talents and is in a rich vein of form at the moment under new Red Devils interim boss Ole Gunnar Solskjaer.

Allardyce, however, can be seen in the video clip from talkSPORT below predicting that Rashford is unlikely to play on past 30, and warned that the amount of games he’ll have to play could lead to repeated niggling injuries by the age of just 25.

This is perhaps not the most controversial view given the way players like Michael Owen and Fernando Torres struggled to hit top form in their late 20s due to playing so much so young.

Still, it also seems a little overly negative considering how enjoyable Rashford has been to watch recently, while plenty of players can also go on for a long time, as Cristiano Ronaldo, Lionel Messi, Zlatan Ibrahimovic and others have done despite lengthy careers at the top level.

"Rashford will struggle to still be playing when he's 30."

What do you think of this? ? pic.twitter.com/8uFW77mnCe